What They Don’t Tell You at the Hospital – Part Two

Welcome to Part 2 of “What They Don’t Tell You at the Hospital! Not everyone may experience all of these things, but from my own experiences and talking to other mothers, it seems I’m not the only one!

6. Your relationship with your husband will completely change – and maybe not for the better, at least at first. Even if you have the most understanding partner (I thought I did, too!), even he/she will be tired and grouchy, which will make you grouchy or even grouchier. You will spend every waking minute taking care of your new little bundle of joy and any second of time you have together, you will probably just fall asleep, even if you don’t mean to. I’m not going to say much more about this, because you will totally know what I mean after only a few weeks. I think most of the time, it really does get better, but I’m starting to think that most new moms probably entertain the idea of “never having another child with that man ever again” at least once during the first year of their child’s life. To be fair, I’m sure new moms aren’t the easiest to live with, considering the hormones and all, and I’m sure our partners may have had similar thoughts. People who think having a child will solve their marital problems, though, are very sorely mistaken.

7. Once you pop out the kid, you’re just “so-and-so’s mom” and you might feel like you have completely lost your identity. A lot of times, pregnant women experience total strangers holding doors for them and family members being concerned about how they are feeling. But once you actually birth the child, all the attention becomes theirs. People may visit, but really, they want to see the baby and aren’t so interested in how you’re doing as much. There are a few people (usually a few family members and close friends who’ve been through this) who will be mindful of this and definitely be “checking up on you” (PPD and all that…), but generally, it can feel like most people are focused on the baby, sometimes even including your husband. To be honest, I didn’t really feel all that much better physically (or mentally or emotionally) for months after having my daughter, but it always felt that my husband (and most people) were so focused on the baby (as I was) to notice that I was still feeling pretty terrible in more ways than one. Now that I’m doing this all over again with a second child, I have some plans set in place to give myself some much-needed pampering over the first couple of weeks of our son’s life. It’s probably not that people are “neglectful” on purpose…it’s just that when you see a beautiful baby, that’s all you can think about. In fact, I am sure I had been the same way to new moms before I had children.

8. The baby weight doesn’t always just “fall off.” Everyone told me that since I breastfed, I would lose the weight easily, but it was so not true. I gained approximately 27 pounds with my first pregnancy (definitely more than that with the second one). When I left the hospital, I had lost about 18 pounds of that and only had 9 more to go. I felt pretty good about this because I thought the breastfeeding would help me get the rest off. I know the reason it didn’t come off as easily probably also had something to do with the food choices I made, but I never lost any more weight until I did something about it. It was very frustrating to see all the new breastfeeding moms who were back in their regular clothes within weeks of giving birth.

9. It’s not that easy to “sleep when the baby sleeps.” People who have never stayed home with a child every day really don’t understand how difficult it is. Even if your child sleeps and you are able to get naps in (which I rarely did, so I wouldn’t necessarily count on it!), they still eat every 2 to 3 hours (again, from the beginning of the nursing session), so how much sleep could you really catch up on when there are diapers to be changed, dishes to be done, meals to be eaten, etc. And not to mention that babies don’t just sleep during all the time that they’re not eating.

10 It will be awhile before you feel like “you” again. This is kind of hard to explain, but after the baby is born, everything tends to be about the baby, which isn’t necessarily a bad thing. But as moms, we forget to keep up with the things we enjoy. For some reasons, dads seem to have no problem with this and may actually think it’s ok to leave you all alone with your crying newborn while he is at work all day and then call at the end of the day to tell you he is going out for drinks with some coworkers and not to wait on him for dinner, and you are left without any kind of break. (My situation wasn’t exactly like this but I have heard that it has happened to other moms.) You will feel utterly exhausted, sometimes to the point of delusional and like you have nothing of your own. Everyone else but you may seem to have resumed to their normal lives while you are still dealing with hormones, breastfeeding stress, severe lack of sleep, and all the extra baby weight.

Obviously, the pros of having a baby greatly outweigh all the negative things that come along with it. If that weren’t true, people would choose to stop at one child and it seems that most people opt to have more than one. Most of these issues will hopefully resolve themselves as your newborn gets older and you adjust to the big change in your life, but it really can be overwhelming in the beginning. It is so important that you take care of yourself and give yourself a break. There is certainly a learning curve when it comes to motherhood! 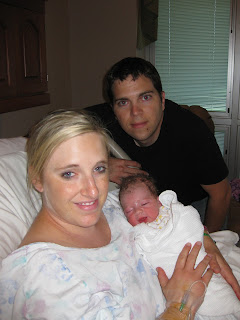